What Makes this Trampoline Different?

If you took a look at the pictures by clicking the link above, the first thing you probably noticed is the base. Instead of having the standard screws, it has rod construction. In fact, Springfree has even patented the design, meaning that you can’t find it anywhere else. 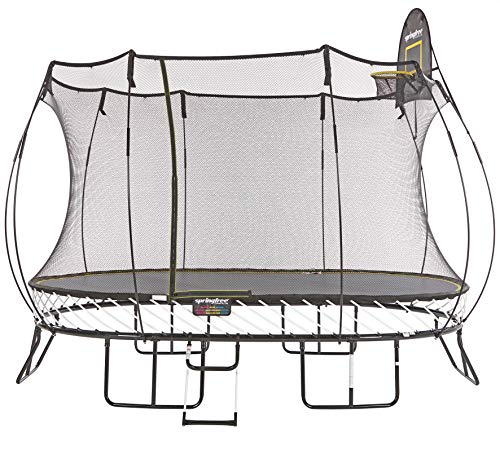 This unique construction lends itself to safety and stability. There are no sharp screws protruding from it – other trampolines, over time, will wear down, exposing the screws. One off-course jump and you stick yourself on one of them. You don’t have that problem with the rods.

This design also lends itself to higher jumps. In fact, many of the reviewers pit the Springfree 8×13 trampoline against other models of similar sizes, and because of the construction, they all said that the difference was very noticeable. 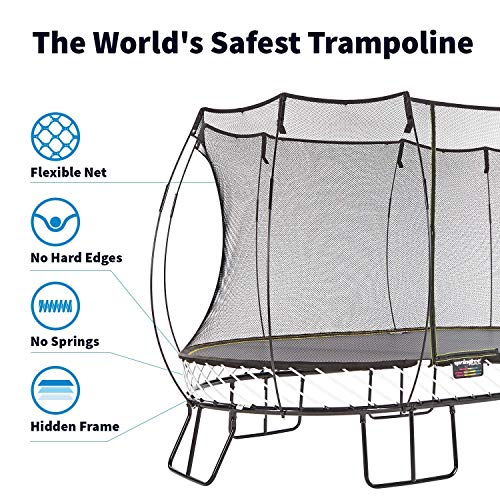 No Padding, Because it’s not Needed

Other trampolines need to have padding on the outside. If they don’t, the metal frame is right next to you, and if you land on it, you will get injured.

There’s no padding here because where the trampoline ends, the enclosure begins. You can use the entirety of the trampoline safely instead of having to tiptoe around the edges.

Sure, lots of trampolines offer galvanized steel. Springfree takes it one step further. 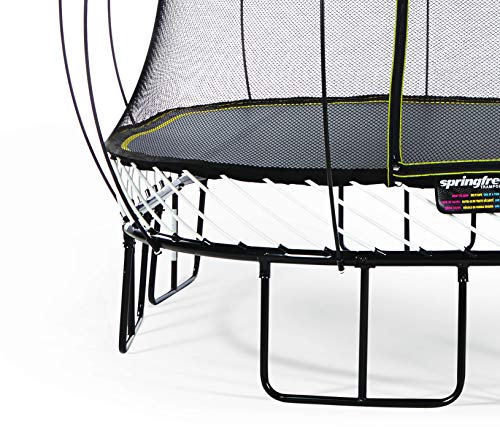 Have you ever started assembling something via pictures, only to get stuck on a certain one? If you can’t figure it out, then you’re out of luck, because if you do it incorrectly, the rest of the structure won’t be able to be put together correctly.

Springfree has a complete video tutorial on how to set up every single aspect of the trampoline. You just scan the QR code on the box and you’re taken to a video where a professional guides you along the assembly process.

250 pounds can be supported on this trampoline. It’s just not recommended that anyone over 250 pounds bounce on it. (As a comparison, many other trampolines don’t have a weight limit of 250 pounds total.) 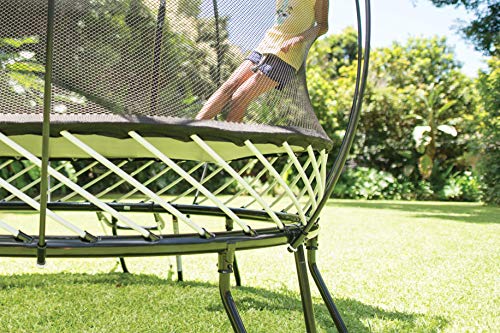 You’ll see other trampolines boasting much larger bounce surfaces. Some can even get up to 17’.

As we mentioned before, though, the problem with these trampolines is the fact that you can’t safely jump around the edges. You can only really “jump” in the center, and if you land on the side, you have to go back in. So although they’re technically bigger, Springfree gives you more area to safely bounce on.

Your bounces also don’t get weaker the further you deviate from the center. On basic trampolines, the outside is basically just a flat surface because it’s so close to the frame. Again, because of the rod construction, every single one of your jumps – no matter where it takes place on the trampoline – will be of equal power.

The Springfree 8×13 trampoline is the cream of the crop. You simply can’t get any better than it – other companies can’t come close to matching it because the technology is patented.

Show Me the Money!

All of these features don’t come cheap. If you can afford it, buy this one. Before you do, though, take a look at the reviews and click here to view it on Amazon. They’ll verify everything that we’ve just said.