Thus, their 15-foot round trampoline caters to the vast majority of the trampoline market. It’s one of the cheapest trampolines available, yet it comes with a ton of add-ons that would usually cost you extra money. We’ll go over this model in depth – if you just want to know the basics, skip to the bottom of the page.

This particular Skywalker trampoline measures 15ft x 15ft x 9.5ft when fully assembled. The frame is made of heavy gauge galvanized rust-resistant steel, which provides solid support and durability. The upper enclosure frame is stabilized by reinforced T-sockets, which prevents the Skywalker 15 feet trampoline from twisting. 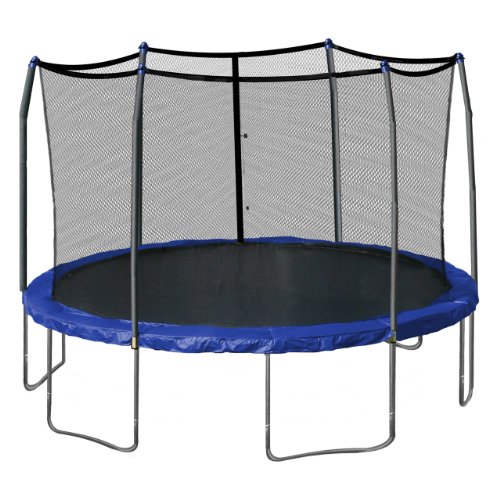 Additionally, the safety enclosure net is connected to the trampoline using a special button-hole feature, eliminating gaps. Skywalker recommends this product for individuals ages six and up; the trampoline weight limit is 200 lbs.

THE GOOD STUFF ABOUT THE SKYWALKER 15 FOOT ROUND TRAMPOLINE

On cheaper trampolines, you run into problems with the elements. When you take cheaper trampolines out of the box, they look great, but as it stays outside in the coming months, it begins to rust. Rust not only looks bad, but it’s unsafe – when metal is rusted, it’s not as strong as it once was. This can lead to the metal breaking, and from that, injury to whoever is jumping.

Skywalker addresses this problem by using heavy gauge galvanized rust-resistant steel. Take a look at the pictures of it – even without seeing it in person, you can tell that it’s stronger than most metal. 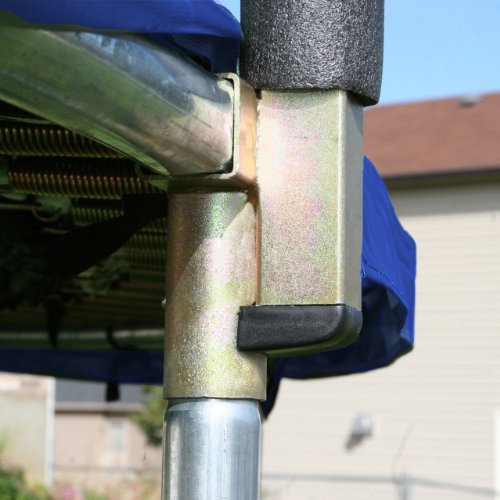 You can keep this 15-foot trampoline with enclosure outside in the wind and snow and you won’t have a problem. Obviously, it’s ideal to move it inside when you’re not using it, but most homeowners don’t have enough storage space to just toss a huge trampoline inside. It’s a nuisance to move it inside every time it rains (or even just drizzles), too.

Though the real “feature” of this trampoline is how safe it is right out of the box. There’s ample padding around the circumference of the part where you bounce – this is important because especially on higher jumps, you won’t always jump accurately. If you jump high and land on a metal rod or on the springs… well, it won’t feel good, that’s for sure.

And on top of that, you get the trampoline safety net enclosure and the proper tools to securely attach it. This means that if your jump goes way off course, you’re still safe. You’ll hit the safety net and then fall onto the padding. It won’t feel good, but you won’t get injured as you would if you hit the ground or the metal rod.

Usually, enclosures are extra, and in some cases, they can get into the hundreds of dollars. Considering the fact that you get trampoline safety features like the padding, and an enclosure for a reasonable price, this is one of the best choices for those looking for some simple entertainment. 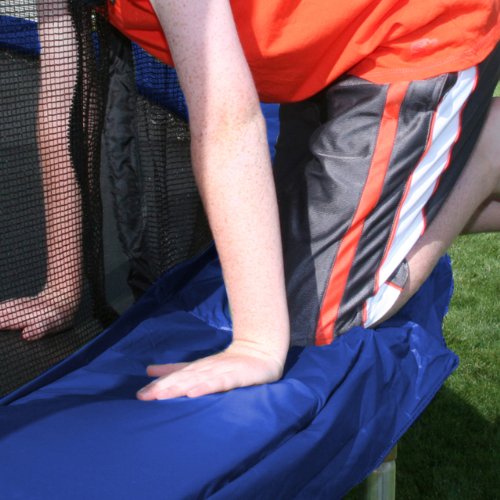 THE POTENTIALLY BAD STUFF ABOUT THIS SKYWALKER MODEL 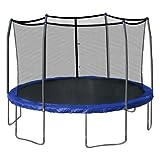 Skywalker Trampolines 15-Foot Round Trampoline and Enclosure with...
Buy on Amazon

WHO SHOULD GET THE SKYWALKER 15 FOOT ROUND TRAMPOLINE?

You should not get this trampoline if you’re a dedicated athlete who is looking to improve in his or her sport via jumping. It’s more of a “fun” trampoline. Trampolines for athletes are usually rectangular, and they’re usually quite a bit more expensive.

You should get this trampoline if you’re looking for some safe, cheap, out-of-the-box fun. The Skywalker 15-foot round trampoline can be assembled within a matter of hours, and all of the tools you need are included. Although it’s easy to assemble, it’s incredibly rigid, and on top of that, there are two safety measures – the enclosure and the padding – included at no extra cost.

To top it all off, because of the heavy gauge galvanized rust-resistant steel, this trampoline will last you for years (or even decades) down the line.