There’s nothing quite like the feel of being pushed into the sky and floating weightless, for just a moment, above the rest of the world. As amazing as that feeling is, though, it’s hardly the only thing you can do on a trampoline. Here are ten of the best tricks you can master. 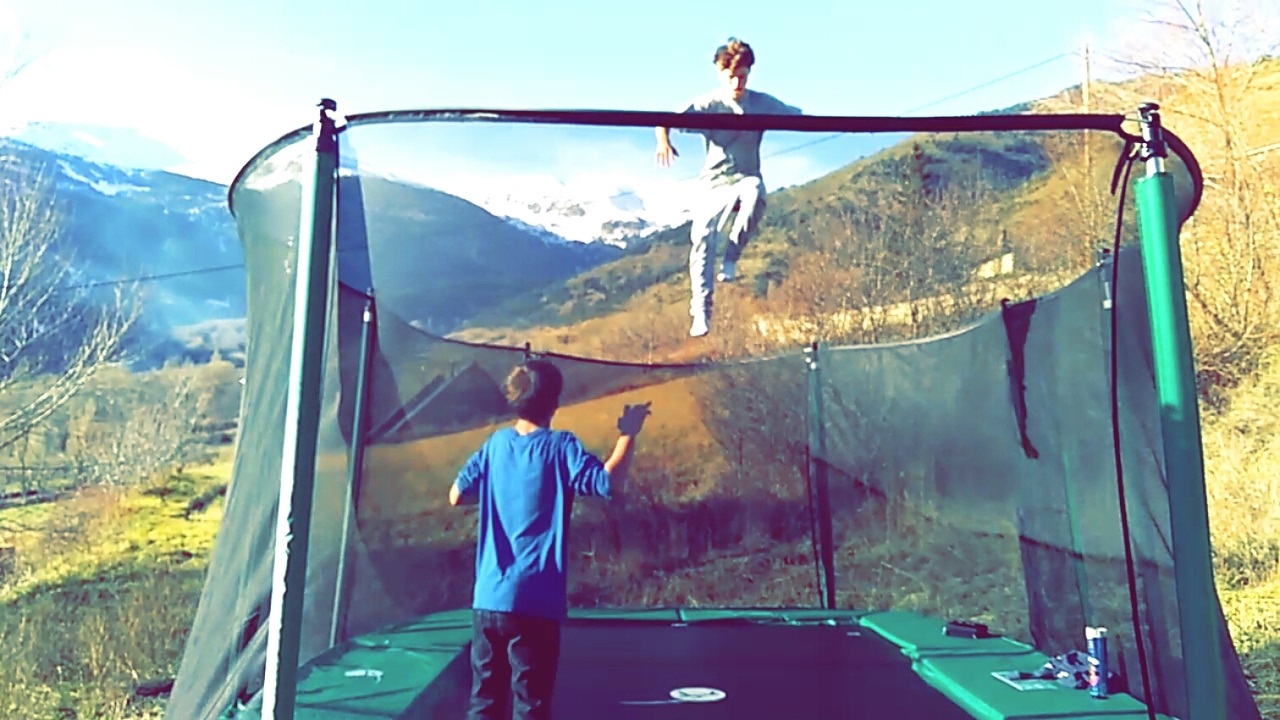 Until you can perform a trick without gear, always wear a helmet and elbow pads. You should also have a net around the trampoline and covers around the springs. This will minimize your risk of getting hurt when you fall.

Also, never attempt a trampoline trick if you don’t think you can start it correctly. Instead of rushing through, stop jumping and let the trampoline reset to its neutral state before you try again. Eventually, you’ll develop the skills you need to consistently perform tricks – until then, always play it safe.

Similarly, do not attempt to combine tricks until you’ve practiced each of them on their own and know how long they take to perform. For example, you may be able to put a half-spin and a knee drop together, but you may not have the time to do two full spins and still get your legs into the right spot.

Finally, you may want to review these safety tips from Nationwide Insurance, as well as some information about kids doing stunts (if relevant). 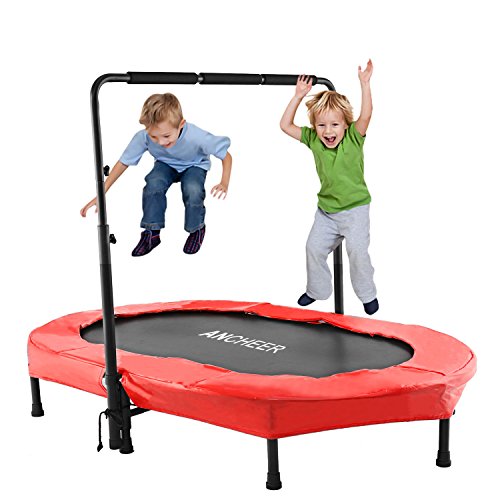 Now that we’ve gone over the safety guidelines let’s take a look at the tricks themselves.

In this trick, you’ll turn to one side in mid-air before landing on the trampoline again. It sounds simple, but it takes time to master the push needed to spin just the right amount. Start by trying to spin just 90 degrees on each jump, and do this for fifteen or twenty jumps. The goal is to get your body used to the sensation of spinning before you move on to anything more complicated.

Once you’re completely comfortable with the quarter-turn, move up to 180 degrees and keep practicing. Some people make a stop at 270 degrees, but that’s not necessary if you’re comfortable with a half turn. The idea is to work up to a complete revolution in the air. If you’re particularly dedicated, you may go as far as two or three revolutions on each jump.

That said, you should try to finish spinning by the time you start to come down. This gives you a moment to orient yourself before you land. If you’re still twisting when your feet come down, there’s a good chance you’ll fall. Proper spinning is more challenging than it looks, which is why you should take it step by step.

This trick is all about the landing – literally. After launching into the air, bring your legs up to a horizontal sitting position. This is easier than it sounds thanks to the push from the trampoline. As you do this, your rear will naturally lower and become the point you land on. One of the best parts of this trick is that the first drop usually retains enough force to launch you back up again.

With practice, you can alternate between sitting and standing. Some people even train to do multiple seat drops in a row – and while that’s harder because you don’t have the force of your legs to back things up, it is possible.

The real reason to learn this trick is for safety. If you can switch to a seat drop from an otherwise-awkward landing, you can distribute the impact over a wider area of your body and significantly reduce your chance of injury.

For this reason, the seat drop is the first (and sometimes only) trick children should learn.

This is the same thing as the seat drop, but you’ll be landing on your knees instead of your rear. However, since your legs are actively involved, you can use them in a push to launch yourself back up and land on your feet.

Like the seat drop, though, this is a pretty good way to distribute force and land safely if you’re not sure you can land normally. 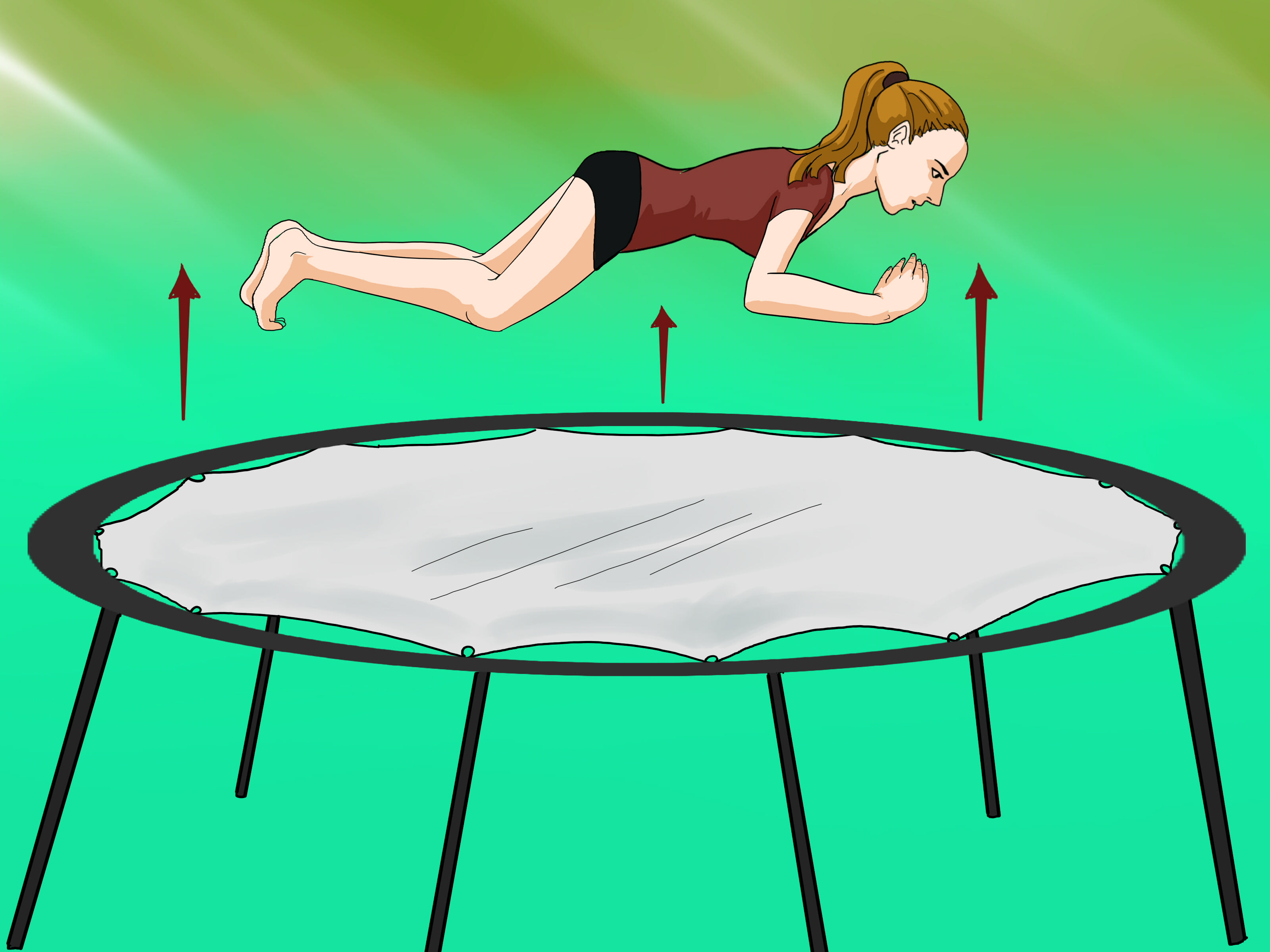 This trick is one of the few that requires a partner. In a double bounce, your goal is to jump at the same time in the center of the trampoline, allowing it to launch you higher than either of you could achieve on your own.

This is one of the more dangerous tricks – if one of you falls, it’s much easier to collide with the other person and fall in a tangle of limbs. For this reason, you should only try a double bounce with someone you’ve already practiced with.

If you don’t have an experienced partner, take it slow and start with small jumps. Get used to match each other’s force and build your way up to a full jump.

Be sure the net is high enough to catch you if you go careening off – some nets aren’t made to protect against the added height of a double bounce. 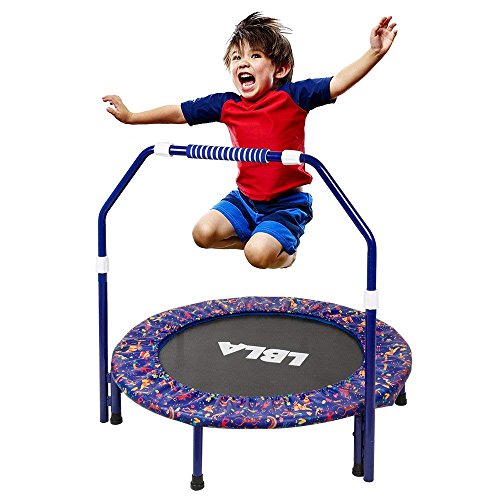 Hey, it’s a trampoline – dropping is literally half of what you’re doing, so it’s no surprise that so many tricks involve it! The Back Drop is trickier than it sounds, though. The goal here is to fall backward and get pushed back to a standing position by the trampoline. The trick to a successful backdrop is pushing your legs out a bit as you’re falling – this gives the direction and momentum for the trampoline to push back against. 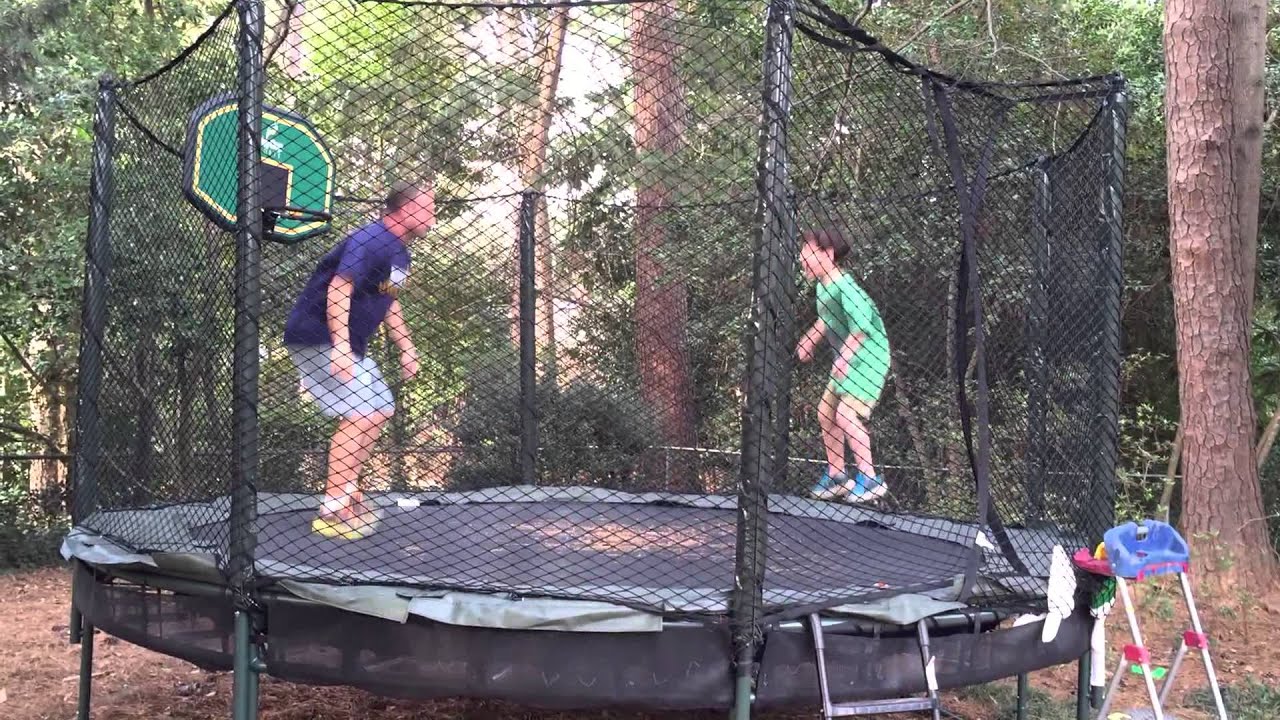 This is one of the more advanced tricks you can learn. In a front pullover, you want to go well into the air, then roll forward and land on your back. This takes longer to perform than many people realize, and it’s important to have a good launch before you even attempt it.

When done correctly, you should be launched high enough to do a complete vertical spin and land on your back again, allowing you to keep doing from pullovers for as long as you can keep the momentum going.

Make sure to avoid moving too much. You want to be launched up again, not forward. This isn’t the Back Drop.

This is the same as the previous trick, just in the opposite direction. That said, the back pullover is much more difficult than the front pullover is, and you should master its predecessor before you even attempt this.

The real key to success with this trick is getting the right momentum for a spin when you first go back. You may need to bring your legs in (instead of kicking out like the backdrop) to get the right motion. 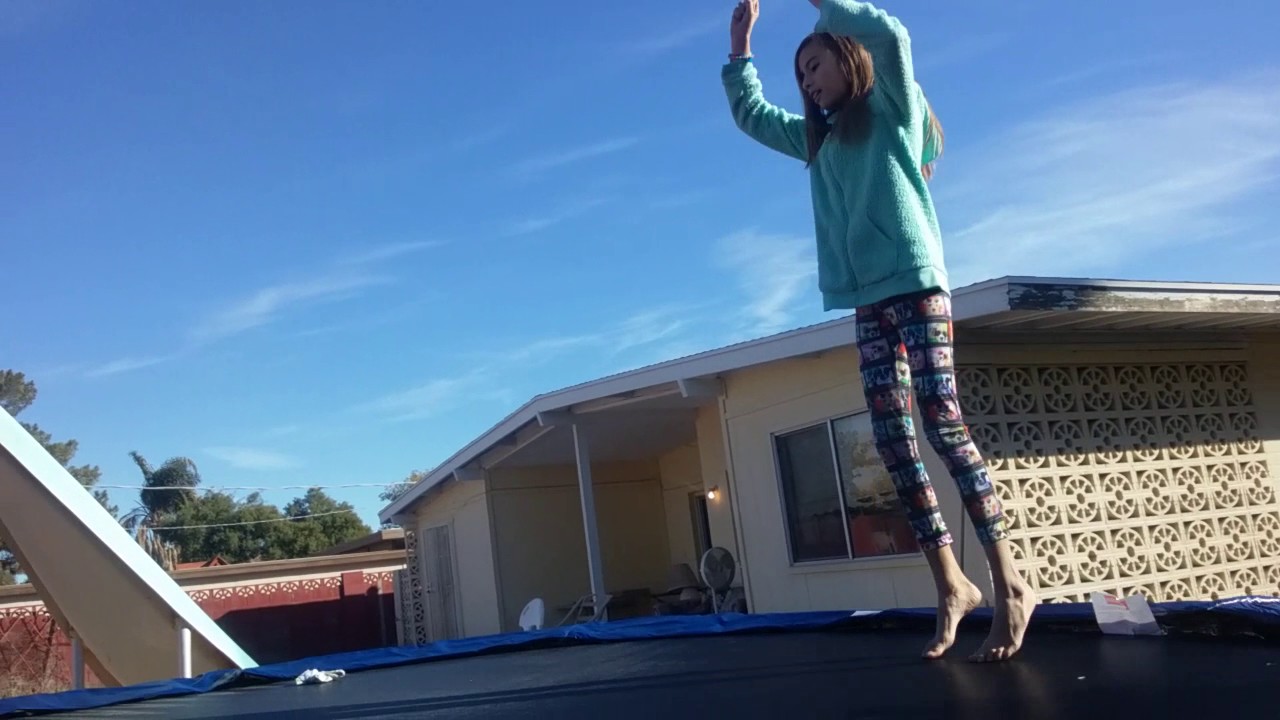 This is the full version of the movement started in the front pullover. Unlike that trick, however, the goal with this one is to land back on your feet… without immediately staggering forward and potentially falling off the trampoline.

That said, the basics of the trick are the same: Launch yourself into the air, then do a full spin and land straight down. If you don’t have any spinning momentum when you land, you can launch back up for another flip.

If you don’t think you can land safely, try to land on your rear instead. It’s always better to distribute the force on a thick part of your body, rather than a fragile joint like the wrist. 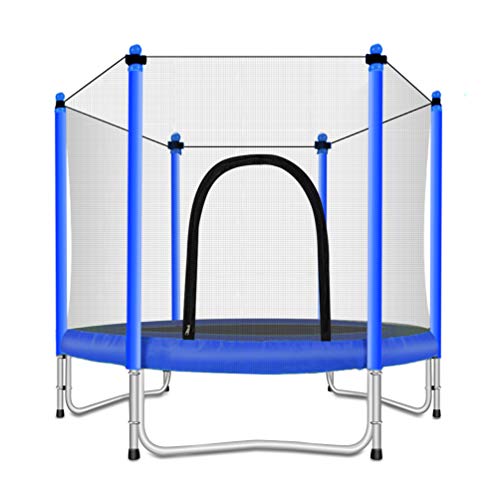 A companion to the Front Flip, this one is considerably more challenging and should never be practiced without a helmet. As the name implies, the goal of this flip is to twist to your side and land safely back on the trampoline.

To make this easier, some people tuck their legs in and lean to the side as they flip, aiming to land in a knee drop instead of on their feet. Side drops can be slower than the front or back flips, so you should never try to do more than one rotation. This may be the hardest trick of any on this list, so get comfortable with several other tricks (especially the drops, for landing) before you even try this one. 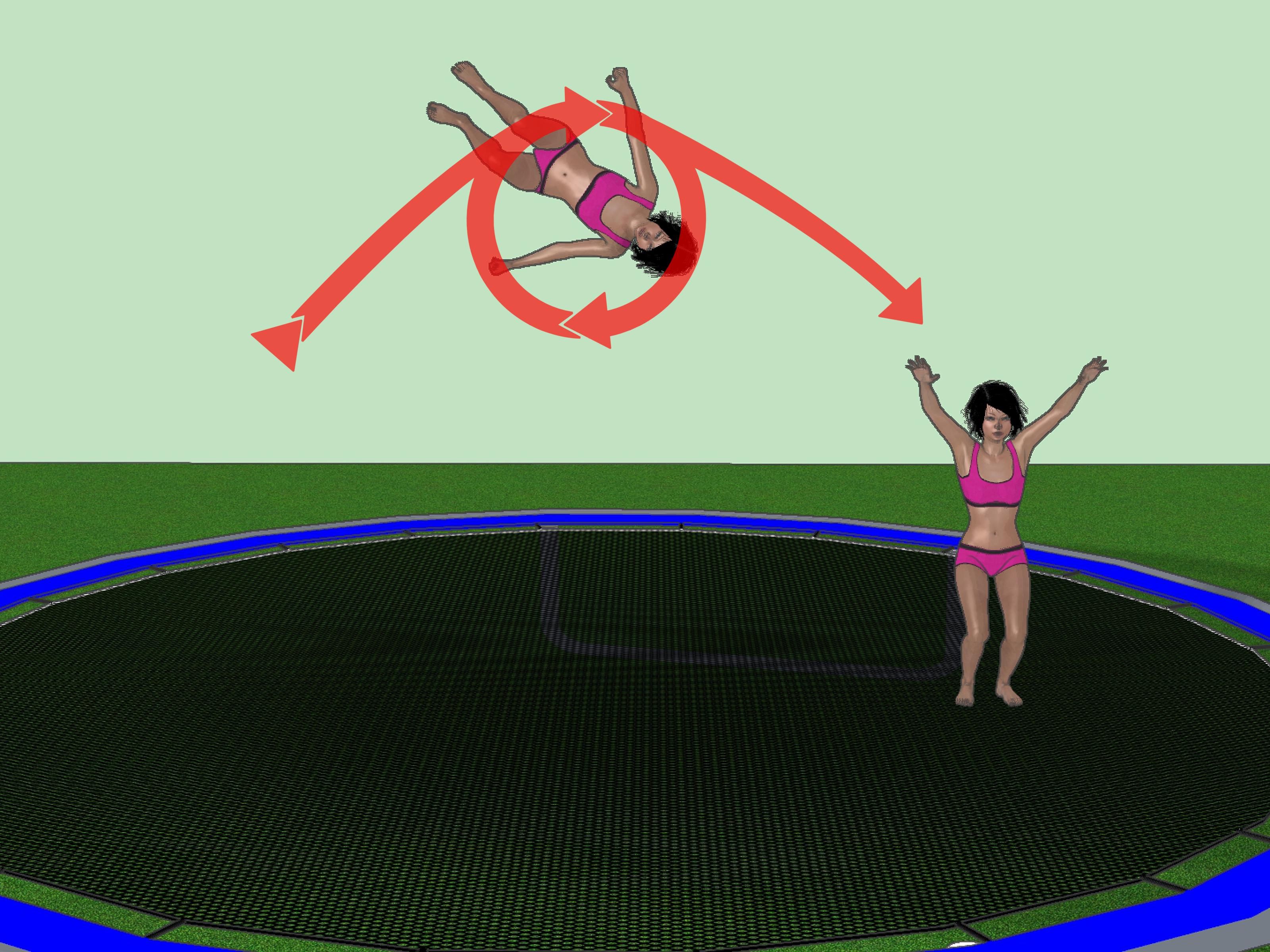 Finally, last but not least, there’s the backflip. Like the Back Pullover, this is the reverse of its associated front version and takes a little more time to master. Once you have, though, you can move on to more impressive stunts like switching between front and back flips, then going right into a front pullover.

As with all trampoline tricks, it takes practice to do this right – but once you’re a master, you’ll be able to do far more than jump up and down each time you’re on the trampoline.