4 Fun Trampoline Games for Kids of All Ages

Trampolines are the epitome of fun, but mere bouncing isn’t enough. There are dozens of fun trampoline games that you can play on a trampoline and are perfect for kids of all ages. While some of these games are meant for multiple people, please remember to stay within your trampoline’s weight constrictions. Also, please bear in mind the safety of the children and the players when doing jump games inside and outside of the trampoline. While trampoline enclosures help to keep your children safe it is always best to have someone supervising trampoline games!

Ring Around the Rosy

Every child has played Ring Around the Rosy before. This classic game requires the same fun chant you’re used to.

But instead of falling down, each child on the trampoline will be able to say their own command one at a time. So, the first time, someone may say we all drop to our knees, and everyone would have to immediately drop to their knees.

Hot Potato is a fast-paced game and another classic that kids will love. You’ll need multiple players for this game with at least three players to get the most fun out of Hot Potato. Let’s get started:

Now, the person with the ball will yell hot potato and throw the ball to someone else quickly. Here are the rules:

A person is out if they:

All of the players will continue until there is only one player remaining.

Follow the leader is a great game with infinite possibilities when on a trampoline. The main concept is that one of the players will be the leader and then the role of the leader passes onto the next player. The goal is simple:

The great part about this game is that a leader can:

Virtually anything can be done, but there is one catch: all participants must remain jumping. If a person does not perform the same actions as the leader correctly, they will be out and have to sit down. 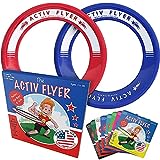 Marco Polo is a game that’s always played in the pool. However, with a little twist, you can play it on a trampoline.

Note: You’ll need a larger trampoline for this game and at least 3 players.

The rules of the game are fairly simple:

This is a game that can go on for as long as you wish. The tagged player will be the new person to sit in the middle with their eyes closed.

We added two more fun trampoline games as a bonus:

These are the best 4 fun trampoline games we recommend right now, they will keep you entertained and smiling during the whole time you will be playing them. They also are a good way to keep you in shape and get plenty of exercise all while having fun.